Theaters closed, but art goes on 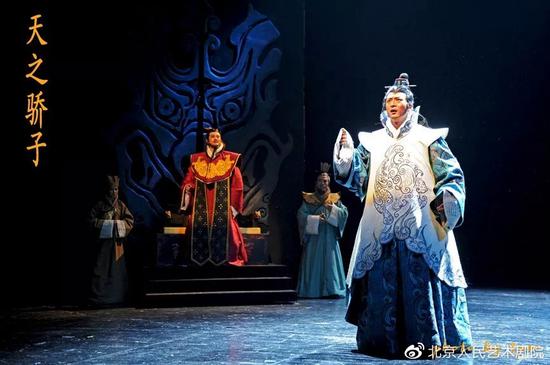 A photo from the 2013 performance of "The Chosen One." (Photo/Beijing People's Art Theater)

Actors' lines are an indispensable part of the theaters, but before the curtain rises, it usually remains a mystery.

However, the Beijing People's Art Theatre on Sunday held an online read-through of a play they've been rehearsing lately. Titled "The Chosen One" (translated from Chinese), the script is adapted from the history of the Three Kingdoms period (220 AD – 280 AD) and tells the story of the three sons of Cao Cao, the duke of the Wei, and their competition for power.

The online reading marked the beginning of the "cloud theater" launched by the Beijing People's Art Theatre in response to the COVID-19 pandemic, which caused the closure of the theater and the implementation of social distancing of its audience and actors.

Feng Yuanzheng, a renowned actor, said the theater plans to host a read-through once a month, even after the COVID-19 pandemic ends.

The actors, who were connected via livestream platforms, poured themselves into activity, reading the script the same amount of feeling they would have expressed on stage. Despite being at home in their living rooms or studies, the actors spared no effort to make the read-through as realistic as possible, even including the chime that would herald the curtain call.

Tang Ye has been directing "The Chosen One" since 2013. She said a script written for the stage is different from that of a radio play, and it is not easy for the actors to adjust to reading their lines in front of a microphone, instead of on stage.

She said the actors started online rehearsal in late February and need to understand their lines by analyzing their characters.

"It's actually harder than in the rehearsal hall because they have to create the characters only by the lines. There is no movement or gesture. The pace, tone and emotions, even the distance between every two characters need to be shaped through the lines," said Tang.

At least 50,000 people watched the livestream, many of whom expressed their love for the reading by leaving a comment.

"It's great. I felt like I was in the theater just by listening to the reading. I can't wait to meet you in the theater," read a comment left by a fan named Axixi.

"Finally, I've got to see the script reading, and it's so good. Let the theaters become a new way of online communication," another fan commented.

The read-through of "The Chosen One" is the first of many performances launched at the "Cloud Theater." This weekend, the actors will read through two more scripts online.

However, theater is not the only art that has moved online since the outbreak of COVID-19 in China. During the lockdown, museums, theaters and concerts have all started to explore new forms of operation by going online.

Similar efforts could be seen around the world as well. In Europe, many troupes have displayed their classic works online or developed plans to explore new art forms that are available during the social distancing period.

No one knows how long China's theaters and concerts will remain closed or how deeply traditional performing arts could be affected by the pandemic. But what is certain is that the artists have not ceased making art thriving, even during such an ordeal.