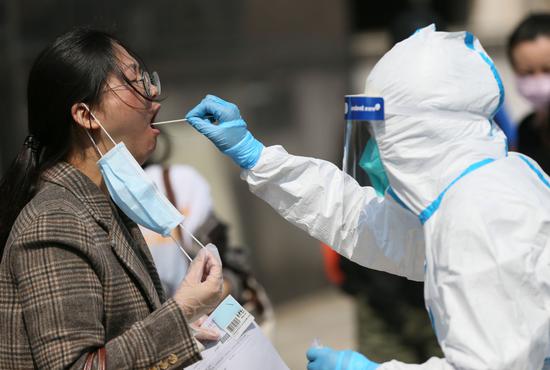 Health workers in Wuhan carry out physical examinations for employees at a company who return to work on April 9, 2020. (Photo by Zhou Guoqiang/for chinadaily.com.cn)

The Chinese Academy of Sciences announced on April 9 that its biomedical institute in Suzhou, Jiangsu province, had created a nucleic acid test kit that could produce results in just 45 minutes.

The kit, which also enables on-site testing, can be stored and transported at room temperature.

Wang Daming, leader of the research team at the academy's Suzhou Institute of Biomedical Engineering and Technology, started working on the kit in January. The following month, he went to Hubei province to test its efficacy.

The kit only requires 20 microliters of nasal swab or mucus samples to produce a result, the institute said.

A single test machine can analyze 60 samples an hour, it said, adding that more than 600 patients had been tested with an accuracy rate of over 99 percent. The cost of the testing was not disclosed.

China has been striving to develop more advanced test kits while also tightening regulations for manufacturers.

Beate Trankmann, the United Nations Development Programme resident representative for China, said the country is one of the few markets that has not banned exports of medical supplies and is actively supporting global procurement to fight the novel coronavirus pandemic.

"What's impressive is the bilateral aid that China is putting forward," she said, adding that it is encouraging to see the nation "returning the favor after having received international assistance at the very beginning of the pandemic".

The kit developed by Wang's team uses a new technique called Hybrid Capture Immunofluorescence Analysis, or HC-IFA, which can dissolve the pathogen's exterior and directly detect the genetic material of the virus.

One of this method's biggest strengths is that it does not require polymerase chain reaction, or PCR, a commonly used process in nucleic acid test kits to amplify the COVID-19 viral signals for detection. The shortened procedure reduces the possibility of human error, making the new method less susceptible to false results.

Moreover, conventional PCR nucleic acid test kits must be transported in special cooling containers that use a considerable amount of dry ice, which has a surface temperature of minus 78 C.

However, only a few logistical companies can meet this transportation requirement, according to Zhou Yan, operations supervisor for Shanghai BioGerm Medical Biotechnology Co. This is because of dry ice's ability to quickly transmute into carbon dioxide, making it dangerous to store in a confined area, such as the cargo hold of an airplane.

The new test kit bypasses this problem, as its reagents are not as sensitive to temperature, so it is cheaper and more convenient to ship worldwide. The kit was approved by the National Medical Products Administration, or NMPA, on March 24.

The Conformite Europeenne, or CE, mark is also being sought from the European Union, the institute said. Since 1985, the CE has been the EU's mandatory conformity marking for regulating goods sold within the European Economic Area.

Wang Yuedan, an immunology professor at Peking University, who was not involved in creating the test kit, said the new technique can be used to test for the virus, but it requires a special machine.

The professor has doubts over its cost-effectiveness for mass diagnosis.