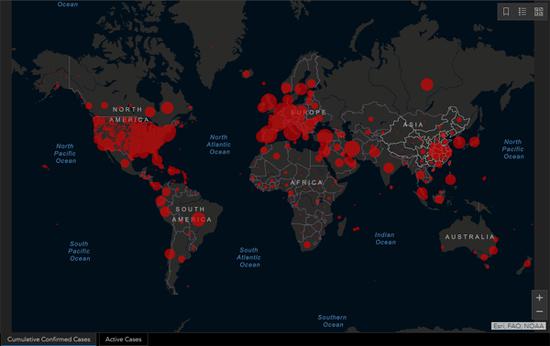 (ECNS) -- Two Chinese students who worked out a real-time COVID-19 tracking map that reports data of total confirmed cases across the world have contributed it to data released by the Chinese government.

Launched on January 22, this tracking map is created and maintained by Lauren Gardner, an associate professor in the Department of Civil and Systems Engineering at Johns Hopkins University, together with two Chinese students, Dong Ensheng and Du Hongru, first-year PhD students at the university's Center for Systems Science and Engineering.

"China has done a good job in COVID-19 data collection during the outbreak," Du said, contributing the quick birth of the map to China's timely and standardized data.

Having similar experience in making dynamic tracking maps, they completed the first edition of the map in just eight hours on the night of January 21.

We are concerned about the epidemic in our hometown, they said, adding that they hope to record the whole process of the virus from its "birth" to its vanquishment.

The map data was manually updated by Dong at the beginning, with up to four or five updates each day. It was able to update automatically every 20 minutes later, thanks to the research and development team. But human modification is still necessary to ensure its accuracy.

They devised a program to collect data from various sources, organized it into a unified format, and update it to the server.

"High-quality data provides a good basis for the research team, as well as for making relevant decisions," Dong said.

"We also hope that countries across the world will further enhance cooperation to control the pandemic spread as soon as possible," he added.

Data should be made more open, transparent, accurate, and more convenient for scientific institutions to collect and collate, so that they can make a more important contribution to controlling the pandemic, his colleague Du said.

The map has become the most cited source of epidemic data for government officials, public health scholars and mainstream media in many countries.

As of April 9, the website has attracted over 16 million visitors worldwide, with average daily traffic of 1 billion.